Was really fascinated watching some recent documentary films on Amazon Prime. “The Guts, Our Second Brain” and “The Healing Field”. These talked about recent research into the Gut biomes and bacteria that are crucial to our health. Some other films “It takes Guts” and “The Fascinating World of Hormones” talked about it as well. We did examine some of this is in medical school, but it was wonderful seeing this information getting out to the masses.

Dan tien, qigong, and acupuncture: Dan tien is an area in lower abdomen, it is medically called “lower diaphragm breathing” in western medicine. It stimulates the 10th Cranial nerve the “Vagus nerve” connection which has an effect of calming breathing, heart, and digestion, This is an area science is now starting to call our 2nd brain. Have you ever heard the phrases, “Go with your gut” or “Use your gut instincts”?

The disciplines of Qigong and Tai Chi Chuan are renowned for teaching the practitioner to use the dan tien center by way of moving and turning the hips and waist. It is a source of health by way of adjusting breathing, mind, and body. 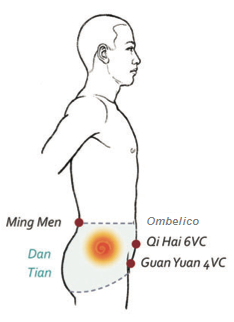 Many Chinese Acupuncture points are on the abdomen. Abdomen acupuncture was featured in “The Guts, Our Second Brain” film as it is gathering more data on patient wellness by using the abdominal points used in Chinese Medicine as a microsystem in conjunction to classical acupuncture.

Gut biomes/bacteria. A lot of research has been conducted on gut biomes recently. We have billions of these in our intestines that absorb food and release energy, but this is assisted by the gut bacteria, they do this for us and we allow them to live in our gut. Fast food, junk food, and processed foods kill them. Indigenous people have the most abundant as they tend to live off the land. Gut Biomes have an influence on appetite. Poor gut biomes typically will make people feel hungry a lot and make poor food choices which creates a vicious cycle of poor diet and nutrition. Lack of good gut biomes has an effect on immunity and also the mind. In an experiment, mice with poor gut biomes were often negative and reacted emotionally, and were irritable and restlessness to stimulus, where mice with healthy gut biomes are more prone to be less reactive to stimulus and calmer. It was suggested to build healthy gut bacteria: cook (steam/boil) with a lot of different fresh vegetables, and choose wide variety of foods to build the gut bacteria. Fast foods, processed foods, and junk foods, all need to be eliminated.

False signals to eat wrong things. Gut biomes affected the mind in this way as well. Having lack of energy to do things and having cravings like chocolate is an example. You may eat the chocolate and feel some energy, but this will burn you out.

Cold, raw veggies, and salads can make one tired. Eat seasonally as well and by environment. Athletes who sweat a lot are more likely to benefit from salads, than an office worker who sits down all day and lives a sedentary lifestyle. Salads are better in hot summer days, while some hot/fire foods can be used in winter.

Some foods can be reintroduced to diet once a patient gets better only on rare occasions, but suggested to not to eat frequently. No food is “bad” in chinese medicine, there is just certain foods that are not right for you at certain times. If you want to get better, then journal how certain foods make you feel.